Intrigue: James Ensor by Luc Tuymans at the Royal Academy of Arts, London

The exhibition ‘Intrigue: James Ensor by Luc Tuymans’ just closed at the Royal Academy of Arts, London. Curated by Luc Tuymans – an influential Belgian painter – the show, and accompanying catalogue, offered a unique chance to encounter and be immersed in the eccentric work of James Ensor (1860–1949). Tuyman’s selection of paintings, drawings and prints reflects Ensor’s versatility in technique and subject matter. Several self-portraits and representation of the artist at work were displayed side by side with satirical images.

A spirited sheet from the Katrin Bellinger Collection, View of the Artist’s Studio with ‘La Coloriste’, signed by Ensor and dated 1882, once formed part of the same sketchbook as several of the studies exhibited at the Royal Academy.

The drawing is carried out in Ensor’s preferred medium for sketching, black chalk, and captures the immediacy of everyday activities in the artist’s studio in his parental house in Ostend, Belgium. Behind a table piled with drawings and art materials, we catch a glimpse of Ensor’s famous painting La Coloriste (1880; Royal Museums of Fine Arts of Belgium, Brussels) portraying the artist’s sister Mitche in the act of painting a fan.

In 1880–85, Ensor filled several sketchbooks with vigorous back chalk studies of his working space and the objects inhabiting it. Although many of the motifs recur in his paintings, these sketches were not conceived as preparatory bur instead document his exploration in the material properties of objects, such as tonality and volume, as well as in the act of drawing itself.

It was probably long after having made them that he cut the best drawings out of the sketchbooks, added his signature, and sold them to collectors. The several hundred sheets he did not sell remained in his family and are found today in the Royal Museum, Antwerp, that holds the largest collection of Ensor’s works in Europe.

Another work by Ensor in the Collection, the 1888 etching titled Crânes et Masques, shows some skulls and a mask displayed on a shelf like props in the artist’s studio; a typical example of Ensor’s macabre and witty still-life compositions. 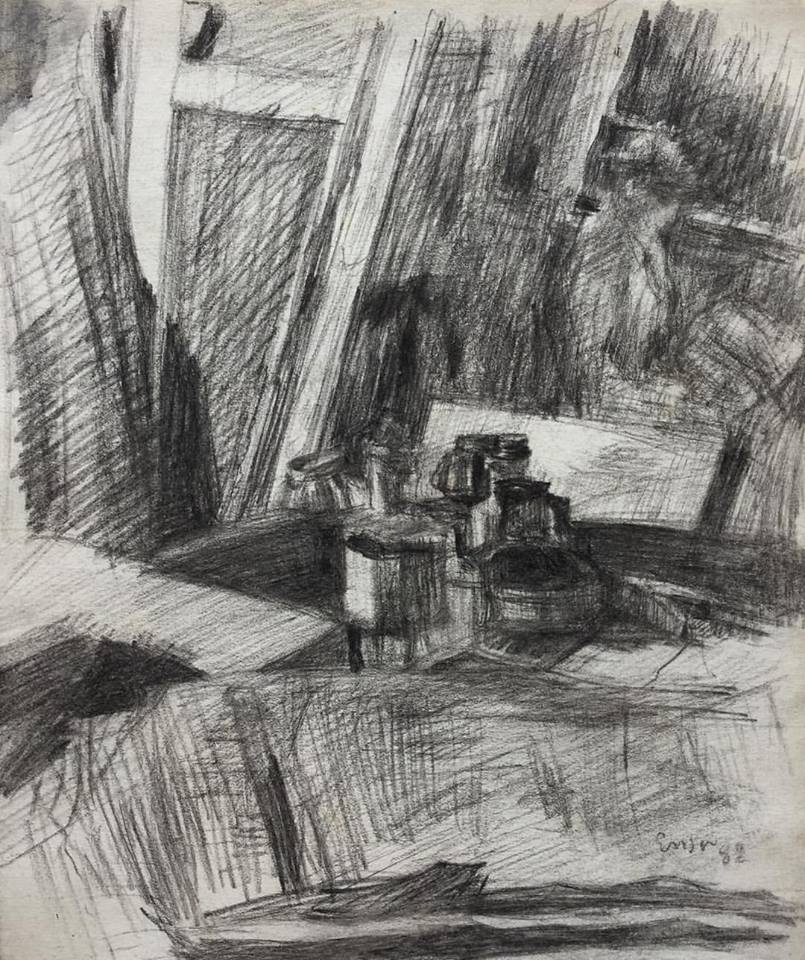