A recent visit to La Maison du Pastel in Paris, the oldest pastel manufacturer in the world, inspired me to look afresh at the Katrin Bellinger Collection’s holdings in the medium and to consider the intersection between the art of pastel and depictions of artists at work.

Artists’ self-portraits in pastel are amongst the most iconic works of the eighteenth-century. Think of Rosalba Carriera’s Self-portrait as an allegory of Winter, c. 1745, or Jean-Etienne Liotard’s eccentric Self-portrait in Turkish costume, c.1746 [1]. Indeed, pastel proved particularly appropriate to the rendering of the softness of skin, making it exceptionally suited for portraiture. After a period of neglect during the ancien régime, it was in the late nineteenth century that the medium received a new lease of life, with the Impressionists celebrating its luminosity and immediacy.

A notable example from the Katrin Bellinger Collection is a striking self-portrait by Maurice Eliot (1862-1945), not a household name nowadays but a well-regarded pastellist at the turn of the nineteenth century (fig. 1). Here, we see the artist as if interrupted while working on a large canvas, which bears the preliminary outlines of a landscape. At once direct and mysterious, this great work is perhaps one of his most accomplished inventions beyond his preferred subject of views of the French countryside, much in the vein of the Impressionists. Just a year earlier, Eliot employed a more conventional yet effective style when depicting his friend, Charles Leandre (1862–1934), at work in their shared Parisian studio (fig. 2).

Less than a decade earlier, in 1878, Henri Roché, a man of science with a keen interest in art, took control of La Maison du Pastel, marking a pivotal point in its 300-year history. Roché’s close relationship with several contemporary artists drove his commitment to meeting their needs for reliable and solid colours in a wide range of luminous shades. Today, Isabelle Roché, distantly related to Henri, is at the helm of the firm. Since 2000, she has passionately cultivated the Maison’s unique heritage, ensuring its continued activity. It was fascinating to learn the history of the Maison from her and her close collaborator, Margaret Zayer, who oversees product development and formulation.

Entirely hand-made following the same processes adopted in the eighteenth century, the Roché pastels continue to inspire artists near and far. A name worth remembering here is that of Sam Szafran (1934-2019), a staunch champion of the Maison and its products.

Szafran’s dizzying perspectives, including depictions of his cavernous studio where multiple trays of pastels take centre stage, spoke to a niche audience and were only given due recognition posthumously (fig. 3). This renewed attention may have come thanks to the recent resurgence of scholarly and technical interest in pastel. A current exhibition at the Achenbach Foundation in San Francisco offers fascinating insights into the use of pastels from the Renaissance to today (open until 13 February 2022). With its ductile materiality and distinctive challenges, pastel allows its practitioners to cross the boundaries between drawing and painting. It also adapts in unique ways to the demands of different aesthetics and expressive quests. A case in point is Paula Rego (b. 1935), whose daring large-scale pastels were at the heart of a recent retrospective at Tate Britain.

Rego’s radical approach to pastel is embedded in a long tradition of women’s mastery of the technique, running from the sixteenth century up until today. A personal favourite in the collection is Annie Leibovitz’s photograph of an assortment of pastels that belonged to Georgia O’Keeffe (fig. 4). While her vivid pastels are a less well-known aspect of her oeuvre, O’Keeffe returned regularly to the medium and even made some of her pigment sticks herself. [2]. “Seeing them, you really have the sense that she held and used them. They are the colours of New Mexico: the reds are the sand in the hill, the blues are the sky.” [3] Thus, this celebration of pastel’s tactile beauty is also a poignant portrait, in absentia, of the American artist.

[2] Leibovitz visited O’Keeffe’s homes in Northern New Mexico as part of her project Pilgrimage (2009-2011), in which she explored portraiture without people but through their memory-filled spaces and objects. The pastels in the photograph are in the Georgia O’Keeffe Museum, Santa Fe, New Mexico. 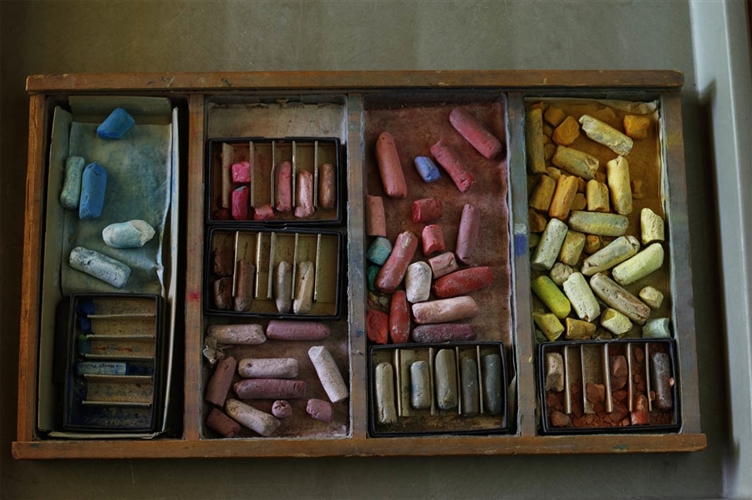