‘Strive for the Sublime’: Jean-Jacques Karpff at Colmar

The Musée Unterlinden in Colmar devotes the first monographic exhibition to the portraitist and miniaturist Jean-Jacques Karpff, aka Casimir (1770-1829). Curated by Viktoria von der Brüggen and Raphaël Mariani, the show and accompanying catalogue explore the career of the Colmar-born artist, which was spent between Colmar, Paris and Versailles. While Karpff’s name will not sound familiar to many today, it is well-known in Colmar – he founded the city’s drawing school and was an active member of its cultural life.

Across seven sections, the exhibition explores Karpff’s personal response to the artistic events of his time. His style was influenced by his master Jacques-Louis David and some of his most talented students – including Isabey, Girodet and Boilly. Like Isabey, he specialised in miniature portraits, developing a unique technique: his miniatures are deftly executed in grisaille, using China ink heightened with white gouache on very thin ivory.

The Colmar museum’s holdings are complemented by loans from both public institutions and private collections. A drawn Self-Portrait of 1793-94 is on loan from the Katrin Bellinger collection (fig. 1). This accomplished pastel is the earliest of three self-portraits by Karpff [1], and was executed when the artist’s stay in Paris was about to end. Due to the Revolution, his main patron, the Comte de Narbonne-Lara (1755-1813), had emigrated to England, forcing Karpff to return to Alsace. Thus, our self-portrait may be interpreted as a souvenir of his Parisian years as well as a demonstration of his skills, aimed at attracting new commissions in Colmar.

In this masterful sheet, the confident young artist looks out towards the viewer with piercing blue eyes as if interrupted while drawing. His right hand holding the porte-crayon rests on an open album – perhaps he looks up in search of inspiration or to observe his appearance in a mirror, thus alluding to the act of self-portraiture. He is styled according to the latest Parisian fashion, with high-neck jacket, foulard and round earrings. The meticulous handling of the pastel emphasised the theme of observation, contributing to the engaging quality of the work. It may be surprising to discover that we know of no other pastel executed by Karpff. The technique was highly popular in Paris at the time, but once back in Colmar the artist would specialize in his grisaille miniature portraits, better suited to the requirements of the new local elite.

Karpff would once more draw himself proudly holding the porte-crayon – the unmistakable symbol of the draughtsman – in his Self-Portrait at the Pulpit, now in Colmar (fig. 2), which was made into a lithograph by his friend, the painter Jean-Baptiste Mauzaisse, after the artist’s death. The porte-crayon, a drawing tool for holding chalk, is a recurring motif in representations of artists, as shown by prime 18th-century examples in the Katrin Bellinger collection. A noteworthy case is the Portrait of Jean Honoré Fragonard by Jacques Antoine Marie Lemoine – one of very few extant portraits of the master (fig. 3). Here, the aging artist is shown holding the porte-crayon close to his heart – a touching proclamation of the primacy of drawing [2]. 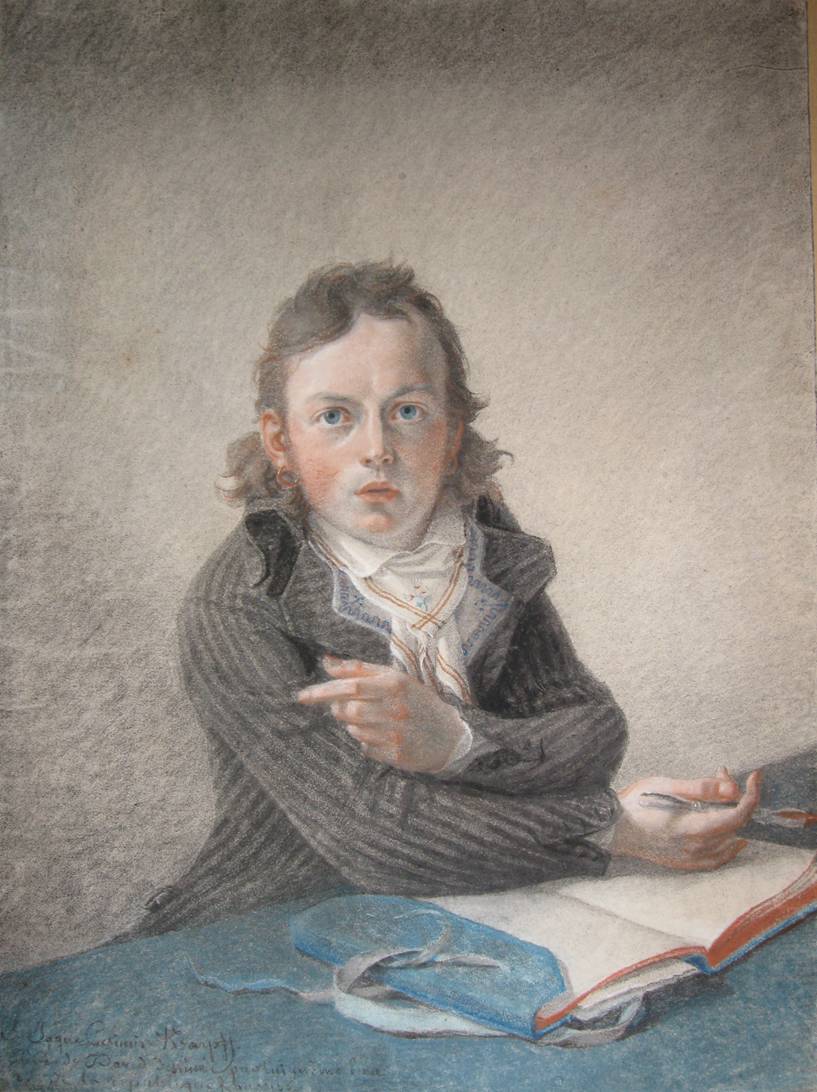 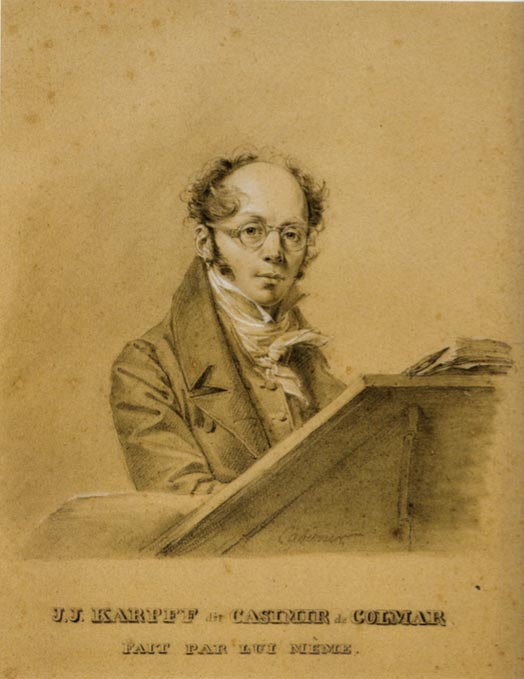 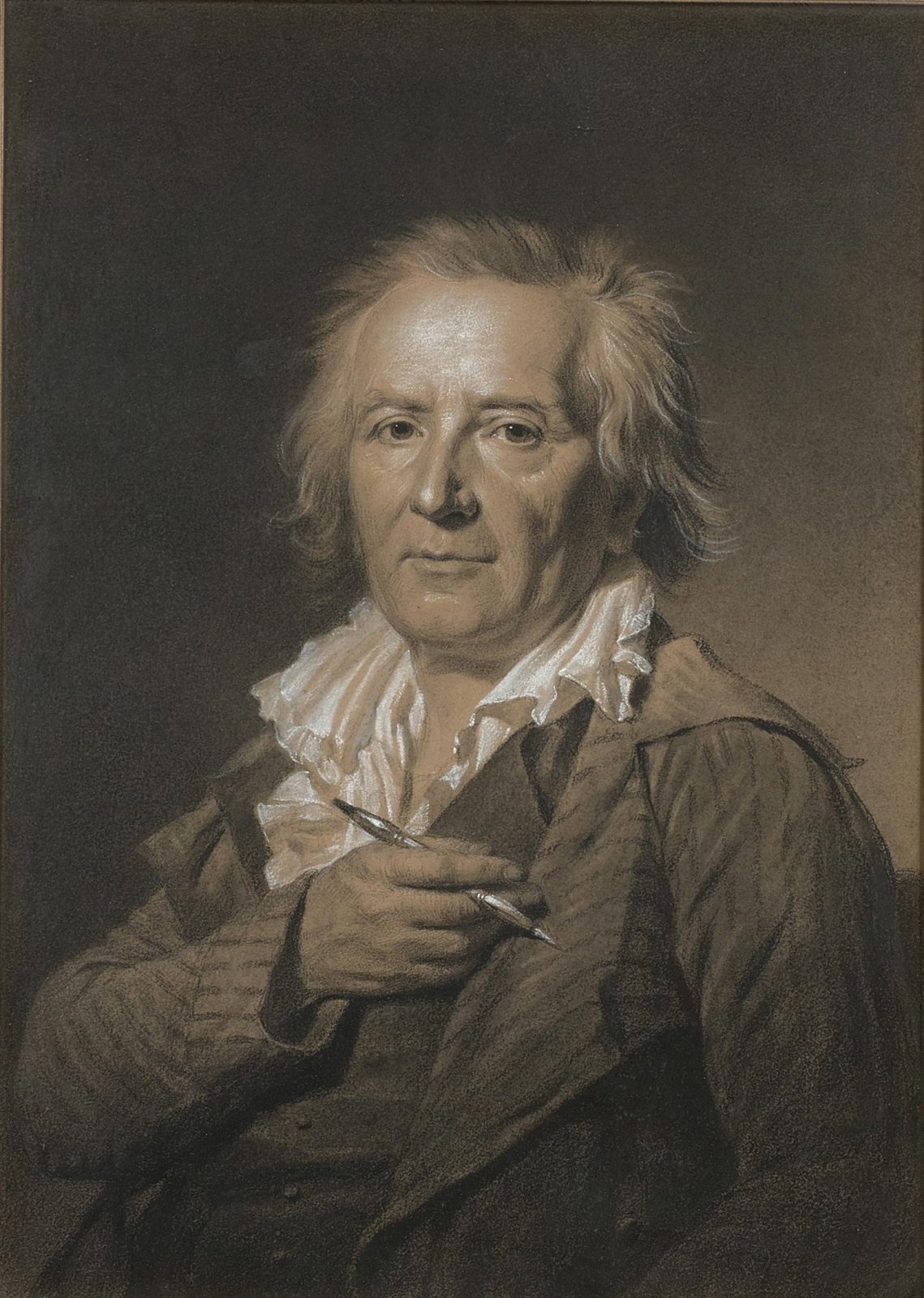